The activity dealt with Earth and Mars as both celestial bodies and mythological deities. The teaching activities were carried out in mixed international groups of students and teachers and also involved students and teachers from the hosting school. The introduction to the activity was a class of Modern Greek. The participants got involved in an exciting "to-know-us-better" exchange in Greek. Next came a class about planet Earth: its birth, formation, development, geological and geographical features, its layers and spheres, its magnetic field. The class introduced a new approach to language development with a mediation activity. As the CEFR of Languages suggests, the students were challenged to become "mediators" of meaning and information, transferring data about the Earth's spheres from a text in their mother tongue to a chart, using English to fulfill the task. The class also included minor mediation activities as well as image linguistic development. A class about Natural Disasters, divided in two (02) parts, taught specialized vocabulary through a series of activities where students needed to guess word meanings, give their definitions, study dictionary definitions, mix and match words and definitions, and reach conclusions by looking for keywords. A traditional, typical CLIL class about Climate Change introduced students into inquiring, searching, synthesizing and organizing data and information from videos as well as their previously stored knowledge. Next followed a class about planet Mars during which students had to compare and contrast Earth and Mars qualities and features after they had watched a video as an input. This class was in alignment with its affiliated one about "Living on Mars" during which the students got involved in a "game of speculations" about the possibility of someone living and thriving on Mars, its pros and cons, its challenges and presuppositions. Planer Mars gave way to its cultural side with the class about "The Evolution of Weapons", during which the students had the chance not only to enrich their vocabulary and improve their description skills but also to get involved into a social dialogue about the usage and the role of the weapons throughout time. The classes also involved a presentation of various environmental issues, which served as the input for the students to start working on the final project of the mobility, a comic strip about an environmental issue of their choice, where a benevolent mother figure (Earth) and a malevolent agent got into a conflict. Students were asked to develop their plot and dialogues for this comic strip. Moreover, there was a class about Gaea and Ares in Greek mythology, contacted by a Greek language teacher, and three (03) presentations about planet Earth, Mother Earth in Baltic Mythology and Titanomachy, organized and delivered by three Greek students.

Activity C4, «What's on Earth touring?», of the Erasmus+/KA229 project «CLIL threads and trends in the solar-system Labyrinth», took place in Gymnasio Loutrakiou, Greece from January 13 to January 17. According to the scheduled activities, Activity C4 developed as follows :

International groups of teachers and students were accepted at the premises of Gymnasio Loutrakiou, where a brief welcome event took place. The Head of the school, Ms. Ekaterini Kikera, warmly welcomed the groups and the school choir sang the original Erasmus+ song, written by Dimitra Mytaki, Greek Language teacher and composed by the Music teacher, Kostas Roumbekas. The choir was conducted by Elsi Petropoulou, a Music teacher. There were also traditional dances and a " pita-cutting" event. Then the international groups were guided throughout the city of Loutraki by student guides of Gymnasio Loutrakiou, who work on this Erasmus+ project and later on the whole team was accepted by the Mayor of Loutraki at the Town Hall. Closing the day, the groups were guided at the Old Loutraki Spa premises, where the lady in charge gave a thorough account of the building and its history.

It was the first day of the teaching sessions at the premises of Gymnasio Loutrakiou. The teaching activities were organized for groups of students that work on this Erasmus+ project, both from the hosted schools and Gymnasio Loutrakiou. On the first day, the students were organized in groups and an ice-breaking activity took place, organized and conducted by Effie Athanasiadi, French teacher (Gymnasio Loutrakiou). Then followed a class of teaching Modern Greek to foreigners, organized and conducted by Dimitra Mytaki, Greek Language teacher (Gymnasio Loutrakiou). Next came a teaching session of a presentation of facts and features of planet Earth, where small texts, images, and videos were used as an input for the students to elicit specific information and do many activities. The session introduced a "mediation activity", during which the students were asked to study a text about the Earth's spheres in their mother tongue and then elicit specific information and fill in a chart in English. The session was organized and conducted by Konstantina Zavalari, an EFL teacher (Gymnasio Loutrakiou). There was also a presentation about planet Earth by the student of Gymnasio Loutrakiou, Ioanna Dimitriou. Then followed a session on Natural Disasters, divided in two (02) parts, conducted by Eva Pato Szebenyi, EFL teacher (Hungary) and Renata Ivanics, EFL teacher (Hungary) respectively. The session was a well-structured, multi-faceted approach to teaching specialized vocabulary, which also enhanced students' inquiring, guessing and grouping skills.

On the social part of the activity, the students and the teachers met in the afternoon to have fun and spend some time together in the city of Loutraki.

The groups of teachers and students participated in an educational trip to Athens. First, the groups visited the Athens National Observatory in Thissio, where they were guided to the several exhibits and had the chance to experience the way astronomical observations and findings were developed throughout time. Then the groups visited the archaeological site of the Acropolis and admired the accomplishments of one of the greatest civilizations. Groups also had the chance to roam in the historical center of Athens and taste the traditional Athenian way.

The second day of teaching activities. It started with a traditional CLIL teaching session about "Climate Change", which was organized and conducted by Effie Athanasiadi, French teacher (Gymnasio Loutrakiou), with the scientific contribution of the Head of the school, Ekaterini Kikera, a Biology teacher. The class taught all four skills (reading, writing, listening, speaking) and enhanced students' categorizing and abstract-thinking skills. Next came a class on "Planet Mars", organized and conducted by Petya Dimitrova (Bulgaria). The class presented facts and features of planet Mars in comparison to those of the Earth, thus teaching comparative forms and challenging the students to synthesize previously taught content with a new one. Then followed a three-hour teaching session, organized and conducted by Dimitra Mytaki, Greek Language, during which students had the chance to study sources about different environmental problems, keep notes and choose an environmental issue of their concern. The aim was for them to create a comic strip about it, following the plot guidelines given to them by the teacher, to address it creatively and with each group's personal touch. The comic strip would be the final product of this Erasmus+ activity. There was also a presentation about Mother Earth in the Baltic Mythology by the student of Gymnasio Loutrakiou, Abadona Nariunaite.

On the social part of the activity hosted students enjoyed dinner at Greek families and teachers were invited for a dinner at the Greek coordinator's house.

The third and last day of the teaching activities. The classes started with a hypothetical scenario of "Living on Mars", organized and conducted by Grzegorz Szulc, Poland. The class was organized around video watching and the students were invited to make speculations about living on planet Mars, thus developing first- type Conditional sentences. A great variety of specialized vocabulary was also taught and students 'drew' a picture of the planet and its features on their account. Next followed the cultural aspect of the activity: inspired by Mars (Ares), the god of war, the Portuguese teacher, Cristina Alves, organized and conducted a class on "The Evolution of weapons throughout time". Vocabulary development was again the core target of this class, but students also had to give definitions about weapons and their usage, thus enhancing their cultural-awareness skills. The activity teaching sessions closed with a presentation of the mythological figures of Mother Gaea and god Ares in Greek Mythology, organized and conducted by Dimitra Mytaki, during which students were asked to produce a family tree. There was also a presentation about "Titanomachy" by the student of Gymnasio Loutrakiou, Socrates Mavraganis. In the end, the participants received their certificates and presents by the Head of the school. A farewell lunch followed. 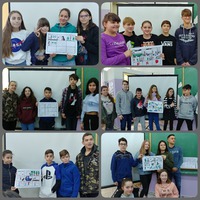 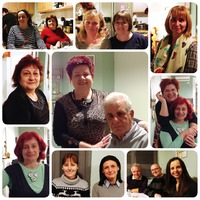 Special thanks go to Konstantina Zavalari,
our coordinator, who invited us
and made an amazing dinner for us. 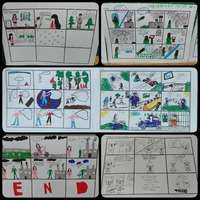 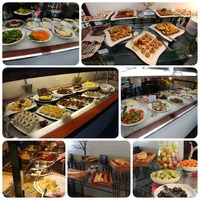 Delicious farewell lunch at a 5* hotel 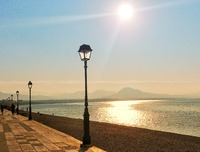 Random pictures of the meeting

We try to dance together

Sightseeing with a local guide

Coordinators at a meeting 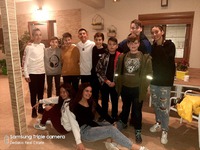 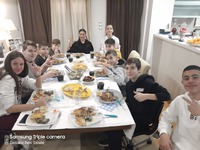 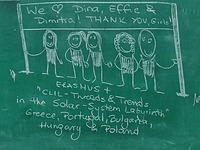 We all are thanksful

Goodbye Greece! I take a little sunshine with me.
Create your website for free!