"The combat of the Giants"
Meeting in Poland

The project's fifth activity, a short-term exchange of students, entitled: "The combat of the giants" referred to both to the planets - Jupiter and Saturn and mythological deities - Zeus and Cronus. The activity took place in the primary and upper-secondary school in Dobrzejewice in Poland from 9th to 13th March 2020. Because of the thread of spreading corona virus at that period of time, countries such as Greece and Portugal were not allowed by either their official authorities, or the students' parents to participate in the mobility. Due to this situation, only Hungarian and Bulgarian teams took part in this mobility. According to the Polish Ministry of education decree, since Thursday 12th Polish students were not allowed to take part in the mobility activities by themselves, either. Taking into consideration all the circumstances mentioned above, some of the cultural events which had been planned for Thursday 12th, were cancelled, too. However, the main educational activities have been implemented accordingly to the programme of the mobility. The teaching activities involved Polish, Hungarian and Bulgarian students. Due to the fact that a certain number of students and teachers from Greece and Portugal were not present during the mobility, there were more students from Poland involved in the activities. One lesson, prepared by the coordinator of the project Konstantina Zavalari, was successfully taught on-line using Skype. The lesson provided information about Jupiter's moons and involved activities such as introducing new vocabulary, video watching, listening for specific purposes and creative writing (black-out poetry). Another lesson, prepared by the Portuguese teacher Margarida Marques, was conducted by the Polish teacher Monika Stawska. The lesson dealt with the topic of Jupiter in pop culture. It involved activities such as creating a slogan in order to advertise a mobile phone called Jupiter and listening to the song "Drops of Jupiter" which involved filling-in the gaps.

On the first day the groups were welcomed by the mayor of our community - Andrzej Wieczyński, the headmaster of the school - Janusz Iwański and the coordinator of the Polish team - Anna Ewertowska. The ice-breaking activity for the international groups were carried out by Monika Stawska. During this activity the students turned into designers of spaceships where a great amount of imagination, creativity and cooperation was involved.

The teaching sessions prepared by the Polish teachers - Anna Ewertowska and Aneta Dobrzyńska were supposed to deal with two subjects. The first one was to provide the students with academic knowledge about Jupiter and Saturn. The second one dealt with mythological aspect of these planets which culturally supported the ideas behind the names of the planets (Zeus and Cronus) and the stories involved. The lessons were prepared using CLIL method in which students could use the content inspired by the subjects mentioned above.

First class "Jupiter - the gas giant" by Anna Ewertowska, was not only to familiarize the students with some facts connected with Jupiter as the fifth planet of the solar system, but also to make them understand some new ideas such as: inner/outer planets, solid/no solid surface, terrestrial/gas planets, Astronomical unit, diameter which would enable them to fully explore the subject during the following days.

The next lesson "Zeus - the god of the gods and men" was divided into two parts. The first part was supposed to introduce the students with the origin of the world by the Greek mythology and bring them closer to the relations which were between the gods and people. Knowing the story of the Greek god genealogy, the relations between gods, people and their behaviour, enabled the students to come to a conclusion why Zeus was called the god of the gods as well as the humans'. The second part of the lesson was to deepen the students' knowledge about Zeus himself by providing some stories concerning his love affairs. The topic was interesting and catchy to the students. It involved video watching, listening & reading for specific purposes and creative writing as the summary of the lesson.

The third lesson was to introduce and explore the knowledge about Saturn - the sixth, second largest planet of the solar system. During the video watching about Saturn, the students were supposed to order twelve facts about the planet in the sequence accordingly to the film. Then, they were asked to mention as many facts as they could have memorized with their handouts covered. As the summary of the lessons, they were asked to prepare a lapbook about Saturn in internationally -mixed groups. An innovating idea of a lapbook was a form of creative presentation of information in the forms of drawings, charts, opened windows and movable elements which main aim was to collect and expand the content of a topic by engaging the students' senses, intrinsic motivation, ICT and creativity.

The lesson titled " Titan Cronus - eating his children" prepared by Aneta Dobrzyńska was conducted in the form of mini-drama. The students were divided into groups and were provided with four scripts. Each script represented a part of the story about Cronus (I. Rebellion against father, II. Cronus' Rule: The Golden Age, III. Zeus' Rebellion: The Titanomachy, IV. Cronus' Ultimate Destiny). The students' task was to act out a story given with previously prepared costumes and props. The whole activity was proceeded with a real theatre activities involving proper articulation and physical exercises.

The lesson prepared by the Hungarian teacher, Renata Ivanics titled: "Saturn's moons" aimed mainly to provide the students with the knowledge about Saturn's most important moons: Titan and Enceladus. The teacher wrote the names of these two moons on the board. The students were given some information concerning the moons on separate pieces of paper. As the teacher was reading the text, students were supposed to run to the board and put the small sheets of paper in the right place (next to "Titan" or next to "Enceladus" depending which moon it referred to). After finishing it, students had to retell information about the moons, using the clues on the board.

The Bulgarian teacher, Petya Dimitrowa prepared a presentation about "Gallileo Gallilei" which aim was to bring the students closer with the research made by Gallileo, his contribution to science mostly in discovering and observing Jupiter's biggest moons. The team also provided some cultural elements by telling a story about Bulgarian tradition called "Granny March".

Apart from the mentioned above, there was a methodological workshop for the teachers prepared by Monika Stawska. The workshop was on "Methods and techniques useful for developing cultural awareness and expression" and it included practical forms of engaging students into their self-development in the areas of art, culture and expression while practising English language. The participants guided by a teacher trainer did a few activities not only to familiarize themselves with the techniques but to experience them as well. That form of our workshop helped the teachers realise how important self expression is and how we can support our students in language development by letting them show their talents and strengths.

There was also an artistic workshop prepared by the Polish teachers and students. It involved creative painting which main theme was "The mystery of Jupiter, Saturn and the universe" . The students were provided with the fluorescent paints. After the activity, they presented their paintings in a special dark-room which had been previously prepared by the Polish students for that purpose.

There were also some cultural activities organised by the hosts such as a visiting The Living Museum of Gingerbread where the participants could find out about Toruń traditions and history involving their own gingerbread baking. The next day students visited the Planetarium in Toruń where they watched a show about the possibilities of life on the planets of the solar system. On the third day the students had a chance to find out more about one of the most important astronomer - Nicolaus Copernicus who was born in Toruń. The group visited The Nicolaus Copernicus' House where they could explore the subject of Copernicus' home life, his heritage and the example of a traditional living of a medieval family in Toruń, too. The group of Bulgarian and Hungarian students visited an escape room - the most popular Toruń centre of entertainment called "The House of the Padlocks" where the students could relax and integrate solving the mysteries taking from the films, certain periods of time and other stories.

On Thursday the participants were to visit the Astronomical Observatory in Piwnice with a lecture given by the professor from Nicolaus Copernicus University in Toruń (the topic of the lecture was to enrich the students' knowledge about Jupiter and Saturn from both academic and scientific perspectives. The visit in the Invisible House was to bring the participants closer to life of the blind people, showing them that the living in the world of darkness can be possible and fulfilled. These two events were cancelled due to the decree of the Ministry of Education mentioned in the beginning of the report. 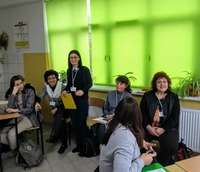 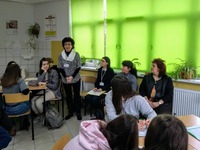 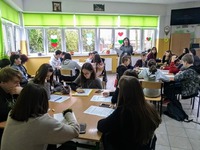 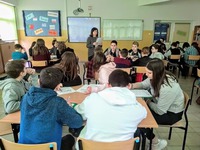 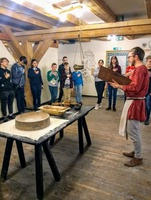 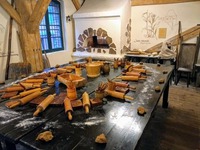 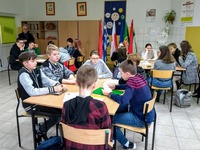 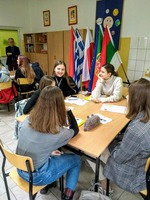 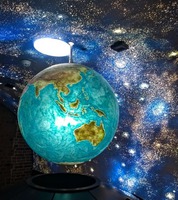 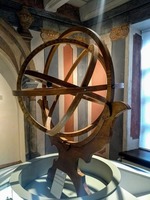